A Review from the UK of Corban Nation 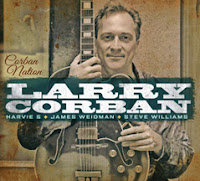 Larry Corban (guitar); Harvie S (bass/bass guitar); James Weidman (piano/B3); Steve Williams (drums) + Steve Slagle (soprano/alto).
(Review by Lance.)
This one’s been on the backburner for a while. Reviewers will be familiar with the scenario – you earmark an album for review and another six come through the mailbox…
Well, all that arrived today was a catalogue from The House of Bath offering bargains galore – why do these catalogue people have to use such shiny paper?
So, tonight it was just me and Larry Corban and the Aperturistic Trio plus, on three tracks, Steve Slagle.

A delightful disc that doesn’t seek to push any boundaries and, if the leader’s statement that The energy this group generates on this recording is akin to capturing lightning in a bottle may be slightly over the top it cannot be denied that they do blow up a storm.

Corban, whom I presume, composed most of the nine compositions (I Should Care being the token standard and, likewise, Segment – the jazz standard.) can swing or rock as the mood takes and the moods do vary. Example; Harvie S’ bowed bass head on Child’s Tuneleading nicely into Corban’s most melodic offering with Weidman maintaining the feeling. This, however, is one of those albums where each track has its own characteristic, each one offering contrasting delights and, as a bonus the three  tracks with Slagle on soprano or alto, the icing on the cake.
There are influences – Metheny, Martino, Scofield, McLaughlin. Which of today’s guitarists hasn’t absorbed the teachings of those Grandmasters? But there’s a difference between influence and cloning. Corban walks the same broad avenue but at his pace taking the occasional alternate route, sometimes looking backward, sometimes looking forward, but getting there just the same.
Not surprisingly, it’s self-released (the label’s name gives it away – Nabroc Records) and, excellent as it is, in today’s market I doubt if it’s going to unleash too much lightning from the bottle.
Lance.
HOW WRONG CAN I BE?
Just heard it on the Grape that the album is now number 3 on the RMR Top 50 Jazz Chart.
Number 8 on the CMJ Top 40 Jazz Chart, along with being the ‘Biggest Gainer’ and ‘Most Added’ at Jazzweek.
Now, I’m not quite sure what all these accolades add up to – me being an Englishman in Newcastle – but it sounds to be more than a hill of beans. Best check it out here.
Attachments area
Preview YouTube video In-Vision from “Corban Nation” 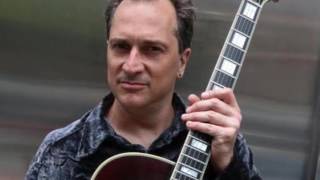