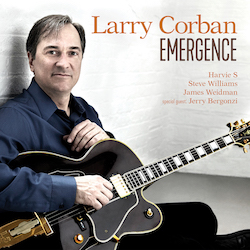 Corban is, without a doubt, one of today’s finest fretters. A Gibson man, he tells the world what an L-5 is capable of with fluent clear solos, drawing on past Gibsonians such as Barney Kessel and Johnny Smith, bringing it up to date with ne’er a glance at Leo Fender.

Surrounded by NYC A-Listers such as the curiously named Harvie S on bass, tenor legend Bergonzi on four out of the eight tracks blowing like there is no tomorrow. Weidman, Williams, and Harvie who, independently operate as the Aperturistic Trio, lay down a foundation as solid as any that a guy like Bergonzi could wish for – Corban too.

Harvie is featured on Never Let Me Go. Beautiful solo. Corban follows on with some lyrical playing of his own.

It’s a lovely album but, as Steve T remarked when reviewing another CD, who’s going to buy it? The market these days for hard copy is undoubtedly at gigs/concerts.

I remember when I’d buy tickets for a concert because I’d heard the band on record and wanted to see them live. Now you read about the band, check them out on YouTube then buy a ticket and, if you’ve enjoyed the concert, and had enough money left after buying a drink(s)/programme, buy the album.

As Corban may not have any immediate plans for touring the UK then the options are reversed so get your digital stylus out and buy it – you won’t regret it!

Sea of Fire; Table Steaks; Observer Effect; Soon to Be; Never Let Me Go; On the Fly; Non-Determinism; You and the Night and the Music.